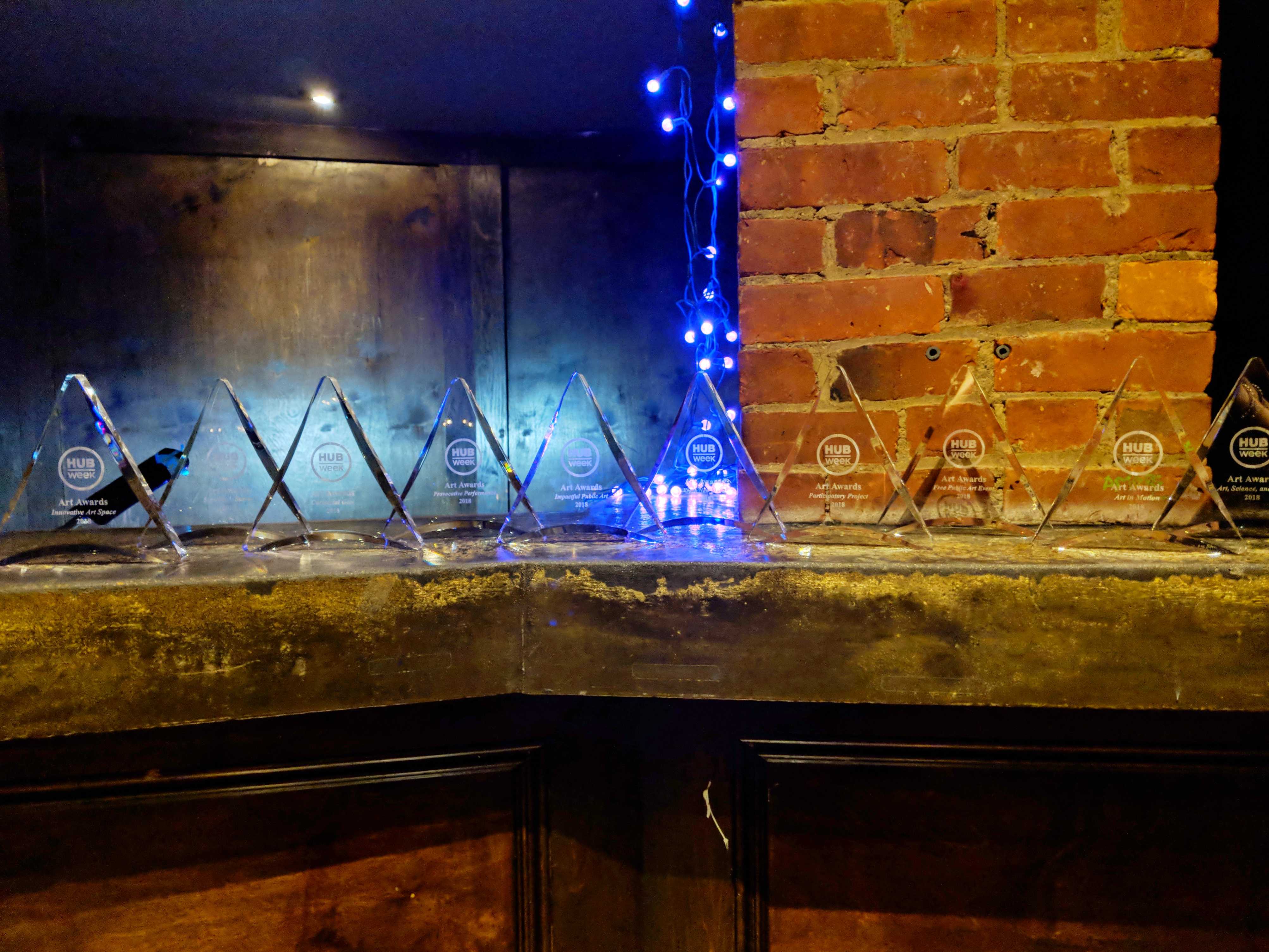 And the HUBweek Art Awards Go To...

After over 1700 votes, the winners of the inaugural HUBweek Art Awards have been decided! The Boston-area arts community has chosen a diverse array of artworks, performances, and exhibitions that showcase the creativity and innovation of this region's artistic ecosystem. A huge congratulations to the winners and all the nominees — we can't wait to see what they do next.

And the HUBweek Art Awards go to.....

Best in Art, Science, and Tech

This spoken word piece on view as part of the Nine Moments of Now exhibition at the Cooper Gallery was inspired by Gender Shades, a research investigation that uncovered gender and skin-type bias in facial analysis technology from leading tech companies.

Curated by Lynne Cooney, Leah Triplett Harrington, and Evan Fiveash Smith, Under a Dismal Boston Skyline examines the city as witness to intensely concentrated moments of artistic experimentation over the last several decades. The exhibition reexamines a group of practitioners working in the late 1970s and 1980s, collectively known as the Boston School. Considering resonances between this group and other iconoclastic artists working outside of Boston’s culturally conservative mainstream, the exhibition connects the Boston School to other artists in the city who have set their own terms for art, life, and community. Under the city’s skyline, and under different circumstances and time periods, the artists in this exhibition sought to represent their friends, families, haunts, homes, lovers, and selves.

ILLUMINUS is a contemporary arts festival that features original installations, video projections and performances by artists who work in the medium of light and sound to create immersive experiences that turn city streets into an installation gallery. This festival is created by and for the Boston community. The festival’s mission is to support a network of artists, designers and creative technologists who collaborate to develop new and innovative works. ILLUMINUS gives artists the platform to enter into conversation with the city and current culture. ILLUMINUS takes place in the public realm and bridges cultures and communities by engaging artists who create through many different lenses.

Muralist Victor Quiñonez unveiled Love Thyself this spring, a new mural in the Grove Hall neighborhood between Roxbury and Dorchester. Supported by Street Theory, the Boston Mayor’s Office of Arts & Culture, and the Boston Housing Agency, Love Thyself covers a three-story apartment building with an expressive portrait of a black woman with a natural afro, eyes closed, and a massive turquoise heart centered between her hands. The work showcases the artist’s unique “neo-indigenous” style that blends graffiti with Native, Latinx, and African ancestries, and is one of several new murals in the Grove Hall neighborhood.

The overhead rail line that transects downtown Lynn serves as a vital commuter rail connection for the North Shore to Boston. In 2018, Beyond Walls assembled a team of partners and worked to brighten and activate the underside of the shadowy overpasses with dynamic LED lighting installations. The Underpasses of Central Square, Washington Street, and Market Street now have an exciting and visually compelling field of dynamic and color changing full-spectrum lighting that not only delights the eye, but contribute to pedestrian safety along the undersides of this public infrastructure.

Located in the Boston Harbor Shipyard and Marina in East Boston, the ICA Watershed transforms a 15,000-square-foot, formerly condemned space into a new civic and cultural asset. Anmahian Winton Architects designed the renovation of the derelict former copper pipe facility, conserving its industrial feel while restoring the building for new use. Each summer, the ICA will invite one artist to create a site-specific work or installation; for its inaugural year, artist Diana Thater illuminated the Watershed with colored light and moving-image projections that reflect on the fragility of the natural world.

Blurring the lines between performance, sculpture, and installation, Forsythe’s Choreographic Objects invites the viewer to engage with the fundamental ideas of choreography. These site-responsive, interactive works are designed to stimulate movement from visitors through interactions with kinetic sculptures, video projections, and architectural environments. Via the artist’s instructions for action posted on the wall next to the works, visitors are invited to move freely through the performative exhibition and generate an infinite range of individual choreographies.

Boston’s Best Drag Queens took Boston nightlife (and HUBweek) to exciting new levels in 2018, taking over the Museum of Science with a groundbreaking lineup of drag performances. Organized by James Wertzel, the performances were paired with full dome immersive projections in the Charles Hayden Planetarium.

Focusing on the work of black women artists, this exhibition examines the political, social, cultural, and aesthetic priorities of women of color during the emergence of second-wave feminism. It is the first exhibition to highlight the voices and experiences of women of color—distinct from the primarily white, middle-class mainstream feminist movement—in order to reorient conversations around race, feminism, political action, art production, and art history in this significant historical period. Curated by Jessica Hong, the show featured performance, film, and video art, as well as photography, painting, sculpture, and printmaking by a diverse group of artists and activists.