We traveled around the globe from the safety of our homes this morning through the magnificent images created by our Manifest Mornings virtual event series guest, Olympic photographer John Huet.

Huet began his career in commercial photography, and with a little bit of luck, started shooting for major sportswear brands like Puma, Reebok, and Nike. He's been fortunate enough to shoot a campaign for Nike every year for almost the last 28 years. Shooting the Olympics, however, is something completely different.

Being a photographer at the Olympic Games (no matter summer or winter) is very physically demanding, according to Huet. He typically averages 4-5 hours of sleep each night, carries about 60 pounds of camera equipment on his back, and has a tendency to lose 15-20 pounds in that one month.

He first got the call to shoot for the 2002 Winter Olympics in Salt Lake City, Utah. The Salt Lake Olympic Committee asked him to work on the “Look of the Games” and also shoot the events for a commemorative book. Huet and his team came up with the idea that every promotional photo would be shot in a studio but in a way that was as realistic as possible. They built a platform that would angle up and down and covered it with white carpeting for a snowy look. These photos were showcased on buildings, busses, billboards, and more, and became symbolic of that year's Olympics.

Something powerful about the Games that Huet experienced firsthand was the sense of community and emotional support among the athletes. There’s a notion at the Games that regardless of medals, everyone is an Olympian, Huet says, and you're one for the rest of your life. Many athletes signify that with an Olympic ring tattoo, a brand symbol with more meaning than most others.

Given the giant community that is the Games, finding moments where other photographers aren't present can be a challenge — especially during popular events. "Sometimes by making a mistake, you get a little bit lucky," Huet said of his iconic image of Usain Bolt at the finish line of his winning 100m race at Beijing 2008.

These days, Huet is at home in Manchester by the Sea. As creative people, he and friend Libby DeLana started an initiative to keep creating during this historic time. They've asked our community to take photos and videos of the everyday and tag our posts with #bewellneighbor. The images and videos are important, but so is writing a little about what’s going on with you. When this is all over, we can look back and have a bank of historic documents of what this time was like.

Couldn't make this morning's meeting? Watch the full conversation in the video below, then set a reminder to join us next Thursday, April 30, for "Creating Wonder in Our Every Day," with electronic musician, Daedelus. 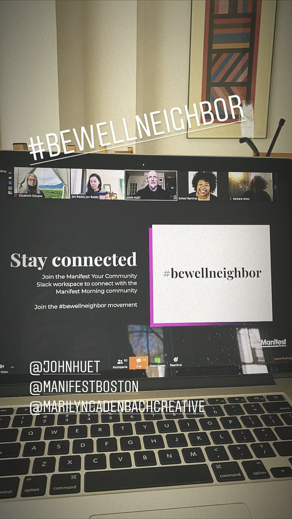 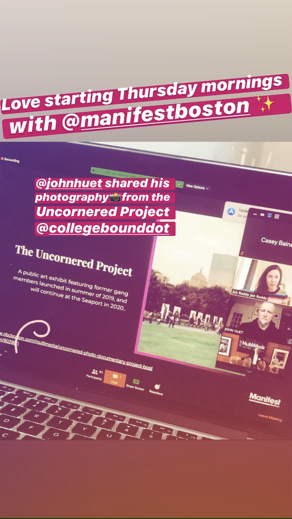